AGS Consulting, LLC is able to create mechanical designs and perform finite element analysis of the resulting designs. The advantage of undertaking both is that it facilitates an optimized final design. Optimization is necessary to minimize or eliminate stress concentrations. If not effectively minimized or eliminated stress concentrations will result in an in-service mechanical failure.

Commercial and industrial fan companies classically have their own in-house mechanical design and finite element analysis capability. Over decades of design experience they develop a range of empirical factors and tacit knowledge, facilitating the design of fans that operate reliably in-service. If the mechanical design or its finite element analysis is sub-contracted, these empirical factors and tacit knowledge are invariable not communicated and consequently the resulting mechanical design does not comply with in house norms. Recognizing this reality requires a collaborative approach, with AGS Consulting, LLC preferring to work closely with client engineers. In so doing the risk of inadvertently ignoring in-house norms is minimized, and therefore so is the risk of subsequent in-service mechanical failure. 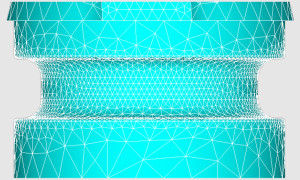 In the example to the right AGS Consulting, LLC was asked to undertake the mechanical design of an axial fan blade root, plus its finite element analysis and optimization when fitted to an aerofoil. In this example the computational mesh comprised approximately 129,000 elements and 195,000 nodes. 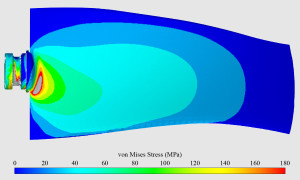 The need for optimization may be illustrated though a consideration of finite element analysis results for the non-optimized blade root and aerofoil, see example to the left. The finite element analysis results indicate stress concentrations at the blade foot-to-aerofoil blend and within the foot itself. The von Mises stress levels exceeding the allowable maximum are colored grey. If this design were not optimized to minimize stress concentrations, the resulting blade would go on to fail mechanically in-service. 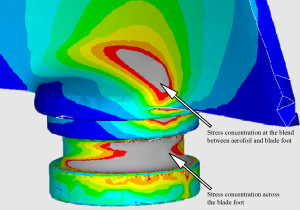 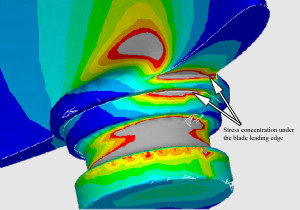 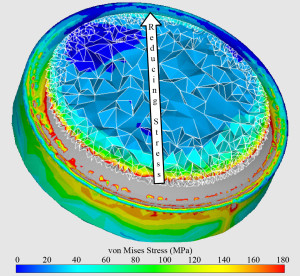 The gradient of stress across the blade foot may be illustrated through a consideration of the von Mises stress levels over a cross section though the blade foot, see figure to the left. The peak stress exceeding the allowable maximum may be avoided by optimizing the location of the aerofoil relative to the blade foot to eliminate bending stresses induced in the blade foot by the combined centrifugal and aerofoil pressure loads the blade is subjected to during operation. 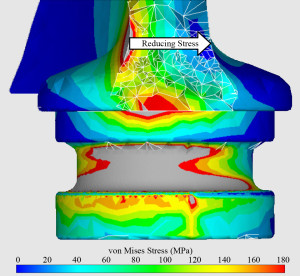 The stress consecrations at the blend between aerofoil and blade foot may be illustrated through a consideration of the von Mises stress levels over a cross section though the aerofoil. The peak stress exceeding the allowable maximum may be avoided by optimizing the aerofoil tilt relative to the blade foot so the resultant centrifugal straightening force balances the pressure load across the aerofoil induced during operation. The final blade design eliminated all three regions of stress concentration, and the resulting design has proven to be reliable in-service.